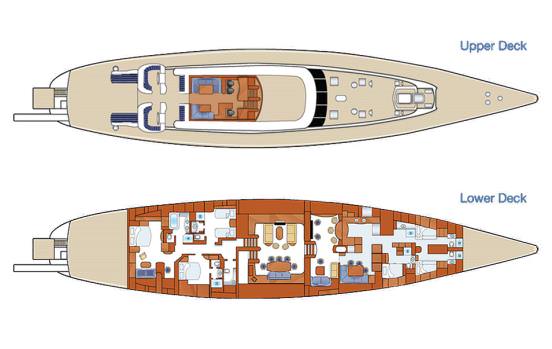 Daniel grew up on the coast of South Africa and got involved in sailing with the Royal Natal Yacht Club at the young age of eight. His career in Super Yachting started in 1998, when he quickly completed three transatlantic crossing and two busy charter seasons before taking a permanent captain’s position on S/Y Gitana, a 120 foot Perini Navi in 2000. After 4 years he went on to complete two successful circumnavigations as Captain between 2004 and 2008, spending a great deal of time in the Pacific. Daniel has a wealth of experience in a multitude of different cruising grounds; he joined Hyperion in 2010 and plans on a long future with us. He has a calm nature and easy-going personality, approachable and confident who follows the belief that the best way to lead is by example.
In his social time he dabbles in Photography, surfing and does competitive Triathlons and road cycling.
___________________________________________________________

Lily was born in Dubai, UAE and spent the beginning of her childhood there before moving to New Zealand to complete her schooling. She worked as an Air Stewardess for Emirates Airlines for four years before moving into yachting to pursue her passion for cooking. Lily is influenced by her upbringing and loves to cook middle eastern and Mediterranean dishes.
Completing her culinary studies in Devon, UK she has gone on to further her studies by completing certificates in Nutrition and Raw vegan food. Lily loves reading, travelling, music and dogs

Kim has just recently started in yachting but has an extensive background in all areas of hospitality. From bartending and serving to managing large scale events, she will be able to cater to your needs flawlessly. Kim is a water enthusiast with a passion for Scuba Diving and also enjoys water sports such as kayaking, jet skiing, paddle boarding, wake boarding and swimming.
She also has an interest in nutrition and naturopathic remedies and if you have an ailment you can seek her assistance for an alternative cure. Ask her for a drink or a cure if you’ve had too many!

Nico joined Hyperion in 2011 and has become an integral member of the leadership team on board. Expanding his knowledge and love of sailing, a common thread of interest running through his life.
Nico spent his childhood summers sailing in the Great Lakes region of Canada, progressively escalating from a position on the race team of the Burlington Sailing Club to Head Coach. Beyond Nico’s extreme enthusiasm for sailing in any capacity, he tends towards the academic, having completed a degree specializing in Communications, Economics and International Trade. His various hobbies include travelling, skiing, and kitesurfing.
___________________________________________________________

An experienced engineer, Billy joined as a valuable asset to our crew at the start of winter 2017. Billy acquired an affinity for engineering whilst working on motorcycles and cars in his native South Africa from a young age. A love of racing dirt motorcycles led Billy to work as a mechanic for the Ford off-road racing team, Billy is a true petrol head at heart.
Billy has completed his Y3 Engineering qualifications and developed a wealth of experience on board both sailing and motor yachts over the past 10 years.
In his free time not spent in the furthest corners of the engine room Billy enjoys an outdoor adventurist life style, from hiking mountains to water sports and of course motorcycle riding when he can.
___________________________________________________________

Oliver started his yachting career in 2014 after graduating University in New Zealand and realising marketing wasn't for him. Previously, he had worked on commercial ferries in Auckland city but learnt the engineering trade whilst sailing across the Pacific on board S/Y Koo.

Over the past few years he has expanded his knowledge on other large sailing yachts both around America and the Mediterranean.
Oliver is a keen skier and enjoys most adventure sports, most recently learning to paraglide in Spain