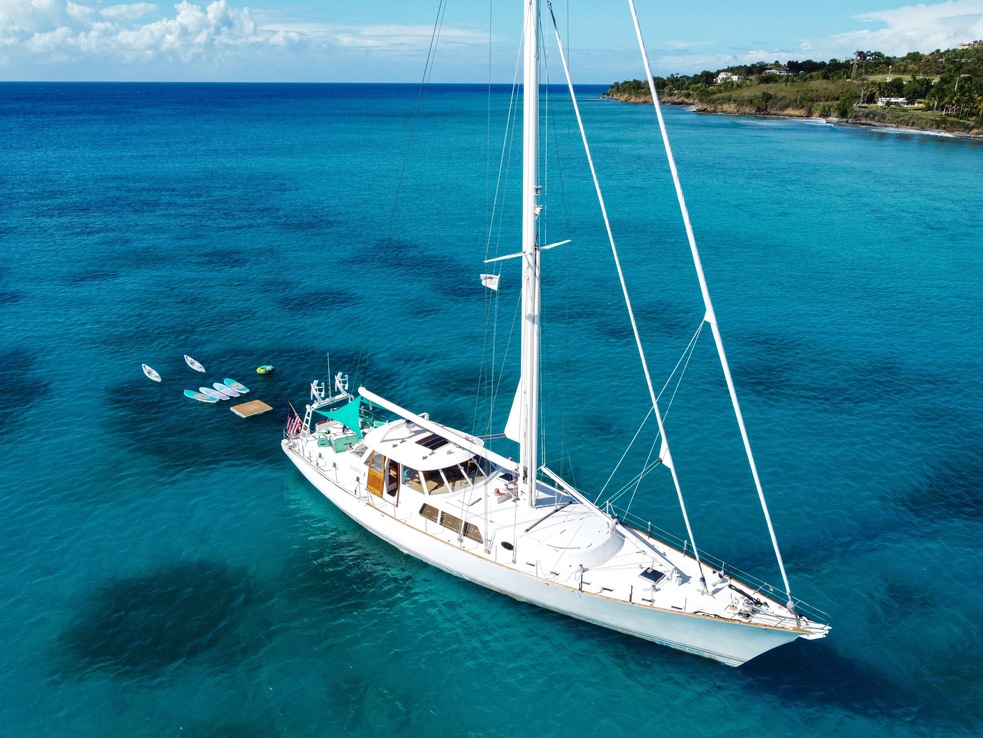 Shawn grew up in, on, and under the waters off Massachusetts’ Nantucket Island. He has always felt compelled to help people feel safe and comfortable in this sometimes-unpredictable environment. A good example happened when Shawn was age 10. He and his dad were returning from an offshore fishing trip. It was at night on rough seas when they heard a distress call. Another boat was dead in the water and headed straight for the rocks. The father and son tossed a line and successfully towed the disabled boat back to Cape Cod. Fast forward, Shawn graduated from the US Coast Guard Academy. He subsequently served in Alaska, Hawaii, Florida, New Hampshire, and even Bahrain.

“My favorite part of what I do now is to share some of my experiences with our guests. And see some of that early excitement in kids or guests who may not have much experience on the water. It’s a nice feeling when guests tell us they feel confident in us as a crew. It’s fun to get notes from guests saying their kids want to be boat captains after chartering with us. I know it’s likely a phase, but it’s nice to know we made a positive impression,” says Shawn.

The sea is a life-long love of Victoria as well. Born and raised in Varna, Bulgaria, the biggest city on the Black Sea, she first sailed on vacation in Greece. She and a friend rented a 40-foot sailboat with a skipper for the day. When her friend got sick, Victoria went anyway. That’s when the sailing bug hit. She soon returned to Greece, took a sailing course, and worked as a day charter skipper on 40 different boats. She also crewed in regattas. A 250-mile passage to a race proved Victoria’s trial by water. Fifty-five knots, 7-to-8-foot seas, and blinding rain all battered the 35-foot race boat. Victoria made it to and sailed in the regatta. Then, after a year in Greece, she obtained her second captain’s license in the USA.

“I feel extremely lucky to have been a day charter skipper in Greece. As the only crew, I did is all. Sailed the boat. Anchored by myself. Prepared lunch and snacks. Served drinks. Made sure guests felt comfortable in the water when we stopped to snorkel. I learned how to manage my time, fix problems when they arose, and stay calm and accommodating. Guests feel comfortable when they see they have an experienced crew that can handle situations efficiently and with a smile. It might sound silly, but I still get excited when something breaks like a pump and I need to fix it,” says Victoria.

Weighing in at nearly 60 tons (120,000 lbs), August Maverick is big! It would take five of the popular charter multihulls to match her displacement. As Shawn and Victoria say, she’s a proper yacht. The size of the raised pilothouse is impressive. It gives guests a 360-degree view. Plus, the tremendous space below means there’s enough room to stand upright in the guest rooms and main saloon. Outside, August Maverick’s mast reaches 110-feet into the air, and she carries an impressive 4,500 square feet of sail. Famous naval architect William Garden designed and built her for trans-oceanic voyages. August Maverick was once featured on the cover of Yachting magazine. Shawn and Victoria have kept her meticulously maintained. They have also modernized her while keeping her elegant classic feel and go-anywhere capability.

August Maverick has a dive compressor and scuba gear for four people. “It’s a great setup for basic dives around the yacht, looking for lobster, or just poking around a nearby reef. For guests who want to do more serious diving, we encourage the use of rendezvous dive companies in the area. They have easy access to the best locations where the larger yachts can’t necessarily go. We work with guests to come up with the right mix based on their preferences,” says Shawn. Shawn attended Navy Dive School. He has dived in locations from Midway Atoll in the Hawaiian Islands to Svalbard Norway north of the arctic circle.

New aboard August Maverick for 2022, both in the Virgin Islands and summer in New England, is Chef Adam Travaglione. Travaglione grew up in his family’s restaurant in the North End of Boston. He attended the Alain Ducasse Pastry School in France this winter. Imagine classic lemon scones served for the start of a great charter with Shawn, Victoria, and Adam aboard August Maverick. In addition to enjoying August Maverick Stress-Free Charters, you will have great cuisine.

S/Y AUGUST MAVERICK sailing the U.S. Virgin Islands and the Caribbean during the winter months and New England during the summer months.